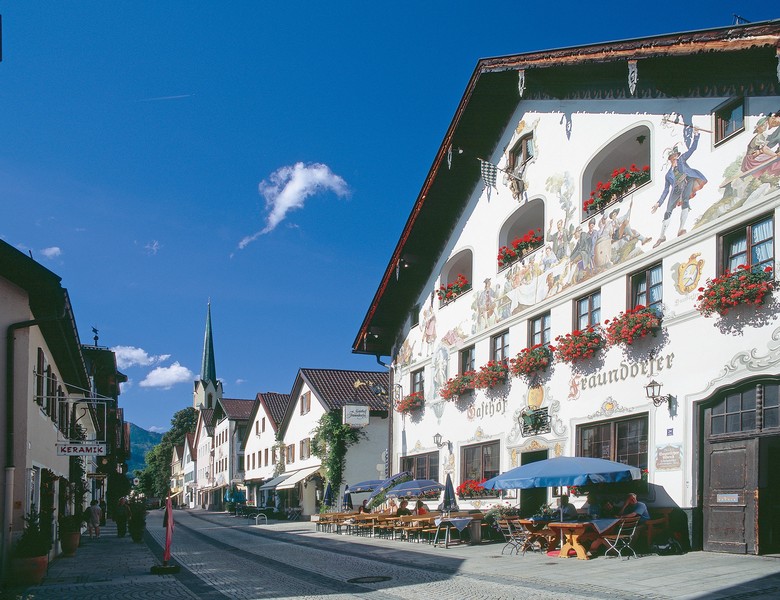 Garmisch- Partenkirchen is a famous health resort, also called the winter capital of Germany. Each year it’s visited by skiers and people who wish to cure respiratory illnesses.

In southern Germany, in the foothills of the Alps, lies a well-known health resort and even more famous ski area - Garmisch -Partenkirchen. It’s one of the fastest growing towns in Bavaria, but doesn’t have the status of a city. Nonetheless, it has easily gained a fame of winter capital of Germany.

Garmisch- Partenkirchen - two in one

For hundreds of years, Garmisch and Partenkirchen were separated villages. They were connected at Adolf Hitler’s command, published in 1935, one year before the Winter Olympic Games. Partenkirchen is older – early information about it can be found in documents dating back to the fifteenth century A.D. While in the resort, it’s worth to take a walk down the street Ludwigstraße, located in the center of Partenkirchen. Here we find many exquisite restaurants, renowned boutiques and typical, alpine inns.

A load of attractions awaits tourists both during the day and night. After dark, you can spend a pleasant evening in a quiet tavern or in one of many discos, clubs and bars. The resort also has a casino, where you can try your luck.

Thanks to its history, Garmisch-Partenkirchen has a lot to offer today. In the resort you can still see traces of the past distinctiveness, which causes that the whole looks like Siamese twins, though not similar. But that is a huge asset of the resort.

The biggest advantages of the village are excellent snow conditions and well organized ski infrastructure. A thick layer of snow covers the slopes for 7 months a year, while the total length of the ski runs is 60 km. The slopes of Garmisch -Partenkirchen is the only place in Germany, where you can ski on the glacier. Everyone will feel great there, starting with amateurs of classic skiing, and ending with the freeride enthusiasts. The latter, along with snowboarders meet in the resort for international rallies.

The town attracts tourists with the famous, annual Four Hills Tournament and competitions in Alpine skiing.

How to reach the highest peak of Germany?

Not without a reason Bavaria is considered a German center of winter sports, while the biggest popularity among tourists undoubtedly enjoys the region of Garmisch-Partenkirchen. It’s here where you can admire a magnificent glacier Zugspitze, the highest peak in Germany (2962 m). You can reach it by yourself, but it takes about 12 hours, especially if you choose the difficult trail through the ridge Jubiläumsgrat (from the Alpspitze side).

An easier way is that leading from Höllental, which takes about 6 hours. After crossing the valley, those eager to and brave can enjoy a vertical, well protected wall, then a short distance through the scree and glacier, and finally another wall, leading right to the top. The views are certainly worth the effort. It’s not only a breathtaking panorama of the Alps, but also a great art gallery, covering the area of ​​450 m². At the top of the glacier will see an exhibition of masterpieces by renowned contemporary artists.

Of course, there is also another way of getting to the top. “Normal” tourists can use the cable car Eibsee-Seilbahn, the Bavarian Zugspitzebahn, which is a cog railway, which leads through the tunnel hollowed in the mountain. They can as well get to the top of the glacier from the Austrian side thanks to the amazing Tyrolean cable car – Tiroler Zugspitzbahn.

Bavaria is like the crown jewel of Germany. In the summer tempts tourists with the crystal clear water of lakes, snow-capped peaks in winter, and throughout the year – with an unique atmosphere and climate. It's worth to come here at least once.